I just can't believe how fast this week has gone by! Thinking back, beginning with today, I found five things to be thankful for right away.

Extra pool time ~ This morning's water aerobics class was so relaxing, ending with some yoga moves that made it hard to want to leave the water. It is the last week that the pool will stay open during the day. Usually, by the time our class is over, there is a long line of families waiting to come in and swim for the day. This week, since most of the kids have gone back to school, there are only a handful. So, a friend and I hung out after class, caught some extra sun and pool time. It was heavenly. I think this duck appreciated the peace and quiet, too. 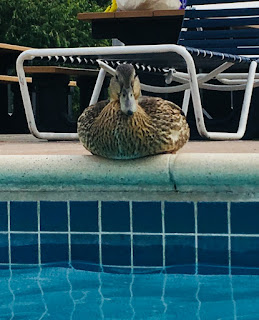 Zucchini bread baking ~ It is 'cool' enough today (only low 80s) that I didn't mind turning the oven on to bake some chocolate chip zucchini bread. It is my recipe from college and there isn't one healthy thing about it, except for a few shreds of zucchini. The house smells soooo good!

I have a really cool blender that somehow I lost the blade piece for. Truth be told, I think I might have been overzealous in cleaning out the pantry one day, and thought it belonged to another blender that I gave to ARC. My bad. Yesterday, I called the manufacturer for a replacement part. When the woman first quoted the price -- that included shipping, my heart sank. I commented that I might as well buy a new blender. She was very nice and said she would wave the shipping and give me the blade piece for a very discounted price. I really don't even need this particular blender, but hated the idea of having to throw it into a landfill because of my mistake.

Earlier this week, I was walking from my car to the entrance of the garden store. I could almost feel that exact moment between summer and fall. The heat of the pavement rose up, but simultaneously there was a cool breeze and the sky was that blue with that hint of purple that I only see in September.

I'm happy to have new garden gloves to replace the pair that have a hole in just one finger, but all the dirt manages to seep in that one spot;)

The pool time sounds relaxing. Zucchini bread sounds so good! It's sad that the price of replacement parts often makes it more economical to just buy a new item. I'm glad the person you talked to was reasonable and gave you a good price plus waived shipping charges. Funny about dirt getting into the one hole in your gardening gloves. We've had slight relief in temperatures today as it's overcast and supposed to rain. I'm ready for fall.

I have not even made it into a pool or lake this year. :( The extra pool time sounds fun and your feathered friend makes a nice poolside companion. How nice to get the blender part for less. Sometimes all it takes is a bit of a protest. I got new gardening gloves this year unfortunately they are too small but I've been shoving them on anyway because it's better than the ones with the hole. LOL. And now I would love a slice of zucchini bread warm with butter. Yum!

So nice to visit you my friend, I have been missing you. Have a wonderful week.

How fun to take an outdoor pool class!! The duck is cute!

Oh yum.....your zucchini bread sounds healthier than the cocoa brownies i made!!

We are enjoying no high humidity or high temps this weekend....and I'm thankful for that feel of autumn in the air in the early mornings here.
It's been a great weekend!

Enjoy the start of the week.

I have never seen a duck at a public pool--too funny!

Karen
Welcome to my backyard fence. I'm glad you're here! I'm a wife, mother of three, and grandma of five. My favorite things include reading, writing, gardening, cooking, and a house filled with people I love. I like road trips, photography, yarns and fabric, and new journals to fill, and I love my Springer Spaniel. My best friend is the love of my life and we've been married for 35 years.